Volcanic Hive is the fifth and final island in the game Into the Breach.

Different from other islands, It is compossed of a single mission: The Last Stand, which is divided in two phases: Surface and underground. A Hive Leader is present in both phases.

The first part occurs on the surface of the Volcanic Hive. The map varies, but always starts with no grid buildings and one Super Volcano.

CEO Kern of the R.S.T. Corporation deploys Power Pylons after deployment, but before the battle begins. Power Pylons provide Grid Power and should be protected just like Civilian Buildings. If the Power Grid is destroyed, the timeline is lost and it's game over.

Any Mechs disabled during the first phase are restored at the start of the second, underground phase, but with basic A.I. pilots. 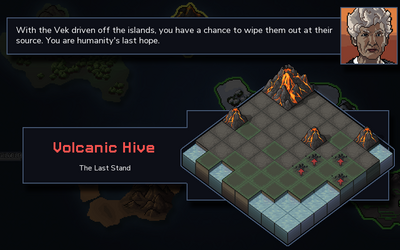 The second part of The Last Stand occurs underground in the Volcanic Hive. The map is composed of mountains (in the form of stalagmites), ground and lava tiles and no grid buildings. 4-5 Vek (including Hive Leader) are present.

Unlike most battles, your squad is automatically deployed in a group near the upper corner of the map. Gana's Preemptive Strike ability can still do 1 damage to adjacent Vek if it happens to land near a Vek.

Additional Power Pylons are deployed by CEO Kern, as well as a Renfield Bomb, which must be protected for 5 turns until it arms itself, destroying the Volcanic Hive. The bomb is deployed adjacent with the mechs forming a 2x2 square. If a 5th Vek is present, the Renfield bomb will fall on top of it, killing the Vek. Unlike the ones found on R.S.T. island, this bomb has 4 health and does not explode upon being destroyed.

Every fourth turn a line of Tentacles divides the area, but skips over the Renfield Bomb.

The battle can only be won if the Renfield Bomb survives the last turn. Vek do not come out of spawn points if the bomb survived the Vek attack phase during the final turn. This means that the bomb will not be destroyed if it is blocking a Vek spawn at 1 health. 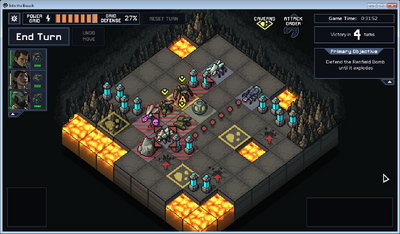 Use the environment to your advantage. There are a lot of hazards that will insta-kill any unit standing there, so take advantage of repositioning enemy Vek on to those hazards.

On the second turn of the underground phase, tentacles will target your mechs, killing any unit there. So on the first turn of the underground phase, think about the positioning of your mechs, and if possible place them where the tentacle targets will be most useful: usually on top of a Vek spawn point that will then be eliminated by turning it into lava, in front of a pylon to block melee attackers, in a convenient bottleneck to block enemy movement, or just out of the way.

As always, if you lose your power grid, you lose the game. However, taking hits to your power pylons does not reduce your score. If it comes down to it, prioritize protecting your last power grid point over the Renfield Bomb, but also remember that you only need one surviving power to win the game.